Yesterday, our family went to the Rocky Mountain Toy Train Show at the Denver Merchandise Mart.

When me and my sister were little, my dad bought us a small train set that went around the Christmas tree. Brian also had a bigger, better train set, that's still in his parent's basement.

We knew that, along with his best friend Elmo, Sam was interested in trains (especially Thomas The Tank Engine). We purchased him an adjustable Thomas the Tank Engine engineer's hat, which he promptly threw on the floor. He will love it and never want to take it off within the next few years (I guaranty).

We headed to the show with a couple of our friends that have a 1 year old. She wasn't old enough to fully enjoy the trains, but Sam had a blast. There were trains of all sizes and for some, he was able to get pretty close. One exhibitor even let Sam hit the button to activate the train's whistle. 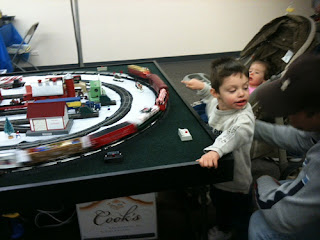 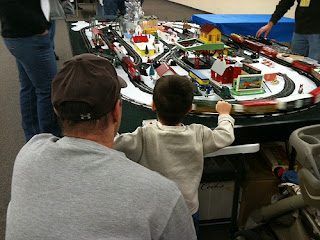 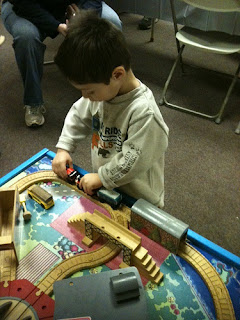 There was also a Santa that didn't charge anything for pictures. Sam wasn't interested (even while holding Daddy's iPhone. 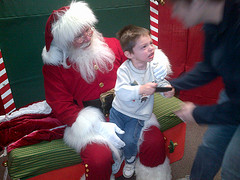 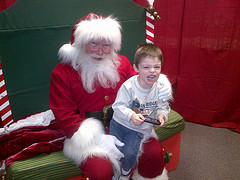 Hopefully, Sam lets us get a better picture of him at "Breakfast With Santa" downtown on Saturday.

After the show, we decided to eat at The Red Rooster Cafe, which received 4 stars on Yelp. The review said that they were best know for their breakfasts, but I was in the mood for lunch.


I ordered a chicken sandwich and, by looking at the plate of food that was put before me, you would have thought I ordered the entire chicken. I ate half and still had enough for a full dinner last night. 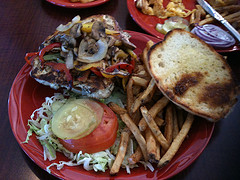 The sandwich was a good as it was big. If you are ever near 57th & Washington, stop by. I wouldn't make a special trip, but their food is pretty good.
Posted by Sam's Minions (aka parents- Angie and Brian) at 2:47 PM

Thank you so much for visiting our family adventure.